75 years ago, on a warm summer evening in 1947, Bugsy Siegel, the legendary gangster who invested Mafia money to build a casino in Las Vegas, was shot through the open window of his Beverly Hills home. We explored the history of the issue through the lens of cinema: how cinema in different years showed the existence of gamblers and gambling establishments.

Imposing New York gangster with an explosive temper, Ben Siegel (Warren Beatty) hates being called Bugsy, which means “off his rocker.” He arrives in Los Angeles on business, meets the magical woman Virginia Hill (Annette Bening) at a Hollywood studio, and decides to stick around town. While traveling to Nevada, Bugsy inspects a mob-owned casino and decides it’s a goddamn backwater hole where things need to change, even though the casino is still profitable in its current form. On the road, he has an argument with Virginia. She drops off Bugsy and gangster Mickey Cohen (Harvey Keitel) right in the middle of the desert – this is when a “divine revelation” comes to him: instead of a shabby casino, he should build a luxurious gambling palace and hotel in Las Vegas and name it after Virginia’s nickname, the Flamingo. But the construction costs went from one million to six, the mob bosses decided that Bugsy was robbing them, and sentenced an accomplice – he was killed with a shot to the eye. This murder became a fact of pop culture and was repeatedly reproduced in films and TV series, from “The Godfather” and “Once Upon a Time in America” to “The Sopranos”. And on the set of the movie “Bugsy” life imitated art: when Hollywood heartthrob Warren Beatty, who for two decades dreamed of playing Bugsy, saw the audition for Annette Bening, acted as his hero – fell in love at first sight and decided to marry.

If you look closely at the plot of the most famous movie about gambling, you can find similarities with Bugsy’s story. Sam Rothstein, nicknamed Ace (Robert De Niro), is appointed by Mafia bosses to run a casino in Las Vegas under the supervision of violent mobster Nicky Santoro (Joe Pesci). Ace falls passionately in love with the femme fatale blonde Ginger (Sharon Stone), but she can’t get over her former pimp, even when she marries Ace – Bugsy is also wildly jealous of Virginia and hates gossip about her lovers. There is also an episode in the film in the desert where Ace and Nicky argue furiously about the state of affairs surrounding the gambling business. And when the mob bosses get caught by the FBI, they sentence Ace to death – another thing is that he was a little luckier than Siegel. Martin Scorsese’s epic story of Ace’s rise and fall reminds us that fortune is fickle: “Nature is a fool, fate is a turkey, and life is a penny,” and while Ace runs the casino business, life throws him around like a chip on the green bough.

Dostoevsky composed the novel “The Gambler” to mend money matters when he lost his money in a German casino at roulette and lost not only his money, but all the cash of his friend Polina Suslova. The hero of The Gambler is his alter ego. The young impoverished nobleman Alexei Ivanovich (Nikolai Burlyaev) serves as governess to the children of a retired general in a German resort town. At first he does not even come near the gambling table, obsessed only by his passion for the general’s stepdaughter, Polina. But for Polina’s sake, he still goes to the casino and wins a huge sum. The girl still rejects him, and Alexei becomes a gambler. The film’s strongest character is Babulenka (Lyubov Dobrzhanskaya), a rich old woman from Moscow who has lost most of her fortune at roulette. Though her relatives, dependent on her inheritance, try to drag her away from the table, she only mutters, “I’ll get even if I don’t live! The Soviet film was co-produced with the Czech studio Barrandov, and the town of Roulethenburg, invented by Dostoyevsky, was depicted in it as Karlovy Vary, where another famous James Bond movie would later be shot, Casino Royale, at the gambling table.

Axel Fried (James Caan) teaches literature at a New York college and suffers from a gambling addiction. More specifically, everyone but him suffers the consequences of his losses: his girlfriend Billie (Lauren Hutton) is alarmed when the menacing musclemen to whom he owes debts break into his apartment at night, and his mother has to hand Axel $44,000 to keep the bookies from breaking his legs. But Axel, who has read Dostoyevsky carefully, follows the path of his hero. He goes with Billy to Las Vegas to play roulette with this money – and wins! The trouble is that at the same time he bets money on the races at the New York bookies and loses. But he’s not really interested in the money – he relishes the chance to play hide-and-seek with fate, as if urging it to deal with him in the harshest possible way.The scriptwriter James Toback wrote The Gambler, imitating Dostoevsky and based on his own biography, and really wanted Robert De Niro to play Axel. But the director chose James Caan, who after “The Godfather” (he played Sonny) was at the peak of his career and exuded such powerful sex appeal that Fate herself would have fallen in love with him if she had been a woman.

An elderly gentleman in a formal suit named Sidney (Philip Baker Hall) finds John (John S. Reilly) on the doorstep of a Nevada diner, with a poker face and penniless. After buying the poor guy a cigarette and a cup of coffee, he finds out that he tried to win money in Vegas for his mother’s funeral, but lost the last one. Sidney takes the boy under his wing, takes him back to Vegas and teaches him how to behave in the casino carefully and win small amounts. In Vegas, he also takes casino waitress Clementine (Gwyneth Paltrow), who moonlights as a prostitute, under his protection. Soon she and John start to have an affair, but Clementine tries to extort money out of an uncooperative customer at the end, and Sidney has to get her and John, who stood up for her, out of trouble. By the finale, it becomes clear why Sidney picked up the good-for-nothing John in the first place – turns out he had a good reason for it. Paul Thomas Anderson turns the genre canon inside out in his debut film: there’s gambling, fatal love, mystery and gangster strife, but it all looks on the screen not like a standard crime thriller, but like a sad jazz ballad about the meaning of life. Even the location for most of the filming was not luxurious Vegas, but the town of Reno, the former gambling capital of the United States.

Melody from the Basement

After serving five years for attempted robbery, venerable thief Charles (Jean Gabin) gets out of prison. His wife offers him to buy a hotel in the south of France with her savings, but Charles is a professional thief who does not think of himself as a petty entrepreneur. He decides to pull one last big job – at the end of the season to rob “Palm Beach,” the most famous casino in Cannes. He takes young adventurer Francis (Alain Delon), whom he met in a prison cell, and his honest and modest son-in-law Louis (Maurice Birot) as his chauffeur. The film immortalized the look of the famous Cannes casino with its hotel and swimming pool: on its roof with white Moorish-style towers, Delon’s character will climb to get into the money vault through an elevator shaft. There are many unforgettable moments in the film: here is young Delon in the prime of manhood crawling through a vent pipe under the ceiling of a gambling hall, and here he is trying to drown in a pool filled with money bags. The ending of the film, with the unflappable Gabin sitting by the pool wearing dark glasses, who sees the bills floating on the surface of the water like autumn leaves in a pond, will forever remain one of the most stylish in the history of cinema.

John Manfred (Clive Owen) is a young ambitious guy who wants to compose a great book on human manners and to that end takes a job in a London casino. The croupiers are obliged to follow a whole set of rules: not to interfere with each other or with the customers, and to immediately inform the management if they notice colleagues cheating at the gambling tables. John tries to be unperturbed, never plays cards or roulette himself, and looks down on the wretched people who indulge in the vice of gambling. But soon all his restraint fades away: first he sleeps with a krupier girl, then he drinks with a guy who steals chips, and finally he conspires with a customer who plans to rob a casino. Based on these adventures, John does manage to write a bestseller, which he releases anonymously. The final twist turns John’s story upside down: the guy thought he had his life under control, but it turns out he was just a pawn in someone else’s game all along. 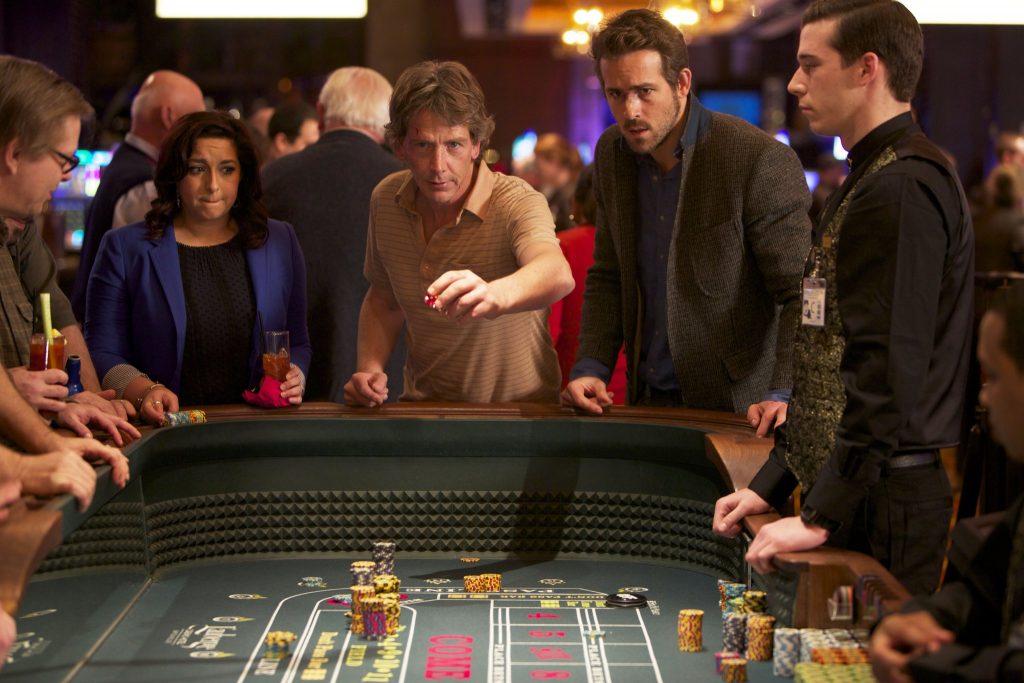 The influence of the great “Casino” is evident here: Alec Baldwin plays manager Shelley, much like Ace. He hires an unlucky Bernie (William H. Macy), who loses his money, can’t pay it back, and gets his knee broken with a baseball bat at Shelley’s behest. Now Bernie works at the casino as a “retard. That’s what they call people who are terribly unlucky – they sit at tables where customers start winning in order to outbid their luck. Bernie obediently fulfills a five-year contract, but when he meets the waitress Natalie (Maria Bello in this role is clearly imitated by Sharon Stone), he unexpectedly gets into trouble. Bernie is about to leave the casino, but Shelley is scheming and won’t let him go. In this movie, the negative hero is just about as interesting as the positive ones: Alec Baldwin is very good as a conservative and traditionalist who has seen Las Vegas blossom and does not want to allow new trends into his casino. The casino is called “Shangri-La,” a fictitious, reserved country separated from civilization by impregnable mountain ranges. Shelley wants customers to feel as if they are in the casino, shut out from reality. But Bernie wants to break that spell and escape from Vegas, “where the day never comes.