Interactive documentary – what does it mean

Having just convened our fourth i-Docs symposium, this seems like a good time to reflect on what is meant by an “interactive documentary” and why we at i-Docs have always viewed it as a way to articulate a set of possibilities rather than be specific medium, genre or platform. This seems prescient in light of the “immersive twist” where interactive work becomes crisper in response to it. Underlying this is the current interest in emerging virtual reality technology, a more specific medium or platform within which more easily defined genres are likely to emerge. This contributes to a growing interest in “experiential storytelling” and “alternative realities” and a potential rethinking of what is meant by interactivity.

While all of this is a natural development in the field that opens up new possibilities, we hope it doesn’t shut things down either by creating an overly rigid approach to the concept of interactivity. This would go against the spirit of i-Docs, which aims to create an interdisciplinary exchange between academia and industry, platforms and genres.

The rethinking and repositioning of the word “interactive” in relation to new emerging terms is not unfamiliar to me, since something similar happened with the term “interactive multimedia” in the 1990s. Working with the BBC’s Interactive Television Division and later with the Multimedia Corporation, I witnessed a broader drive to define this new term and create a market for its products. As a result, what was originally seen as a broad term for a new set of capabilities suddenly became closed and equated with CD-based delivery systems. I don’t think “interactive media” ever recovered from that, and like the Titanic, they pretty much sank when the CDs ceased to exist. 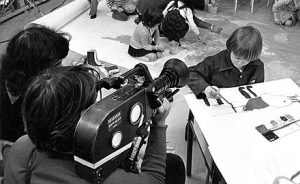 So here is my call for the interactive documentary not to suffer the same fate, and my argument for its use in i-Docs to continue to be an expansive and open term around which a series of conversations between disciplines and between theory and practice. may be called.

But first, what is an interactive documentary?

As I explained in the Sage Encyclopedia of Social Media and Politics, it is “a term used to describe the new possibilities for both constructing and representing “reality” created by the human-computer interface.” For a documentary to be interactive in this context, a physical action must take place between the human and the computer.

This physical action can include many different types of interactivity, such as clicking on a website, tapping on a tablet screen with multiple touches, activating censors in gallery installations, using a smartphone to access local media, and participating in a live performance.

As computers become more integrated into everyday life, the possibilities of interactive documentary filmmaking continue to evolve along with our understanding of these possibilities. The implication must also be the recognition that documentaries are not only about filmmaking, and that while technology is key to the debate, it is ultimately people, not machines, that should be at the center of the design process.